“Boy, that’s good slaw!”  With a little care and attention, plain old coleslaw can inspire what Peter Reinhart calls “the coleslaw reaction” in his book Sacramental Magic in a Small-Town Café.  That reaction occurs when an unsuspecting diner focuses on the main dish and automatically takes a bite of coleslaw, then notices it’s no ordinary coleslaw.

Good coleslaw, in Peter’s opinion, does not include “pineapple, carrots, apples, yogurt, raisins, walnuts, and just about everything else that is supposedly part of someone’s grandmother’s secret world-famous recipe.”

To quote Martha Rose Shulman in The New York Times, cabbage is a nutritional powerhouse, “the most important vegetable in the world from the point of view of nutritional benefits and cancer-fighting ability.”  It’s also an excellent source of vitamins K and C, and a very good source of dietary fiber, vitamin B6, folate, manganese and omega-3 fatty acids.

At the Harris-Teeter recently, I was surprised to see a produce clerk carefully ripping dark green leaves off some nice cabbages. True, sometimes the outer leaves are wilted and should be discarded, but these were crisp and beautiful. It could be that the other Harris-Teeter customers prefer pale cabbages. The clerk probably thought I was nuts, but fortunately he was willing to give me the lovely discarded green leaves. 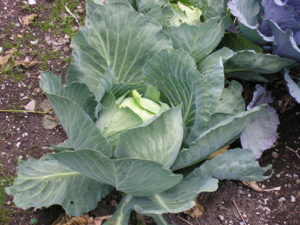 Grate or shred the cabbage as thinly as possibly.  (A food processor, around here generically called “the Cuisinart”, does an excellent job with either the grating disc, for chopped slaw, or the 2mm slicing disc, for shredded slaw.)

In a bowl, combine it with the diced onion and all the other ingredients.  Depending on the size of the cabbage, you may have to adjust the amounts of mayo, sugar, and vinegar to taste. The slaw should be sweet, sour, peppery, and creamy. Allow it to sit for at least 1 hour before serving.  It will taste even better the second day.

Coleslaw will keep up to a week or two in the refrigerator (although it usually will have been consumed by then).  After a few days it gets runny, as the cabbage leaches out its water, and a taste of onion starts to dominate.  Regardless, it will, to the end, be a conversation stopper.