My grandfather Robert Warren Howe Mish wrote this recipe in an old Washington & Lee spiral notebook in green ink. I have tried to make sense of his recipe. Unfortunately the green ink has faded in spots. As you can see from a quick scan of the ingredients, this eggnog is so strong that it is almost undrinkable unless you are accustomed to straight liquor. Adapt as prudent.

My mother made this eggnog every Christmas and kept it, covered, in a giant number 13 earthenware bowl (alas, broken years ago) on the back porch where the Virginia winter chilled it for weeks during the holiday season. Of course my brothers and I would secretly try it out, but it was so strong that we quit after one taste. My mother served it to her friends, who flocked to our house for a cup or two of eggnog and perhaps a Martha Washington jet. She would sprinkle a little nutmeg onto each cup of eggnog, but a purist would perhaps not sully his eggnog with nutmeg.

Controversy rages on the internet about whether it is safe to drink eggnog made with raw eggs. Here is an NPR story that would seem to say “Yes”. If you are leery or don’t include all the liquor in the recipe, use pasteurized eggs.

Separate eggs and beat egg whites until stiff. Beat yellows and pour in liquor slowly. Beat until eggs are cooked. (The Gransbest science geek verifies that alcohol denatures the protein in eggs, thus “cooking” them.) Whip the cream and fold into egg yolks and liquor. Fold in the beaten egg whites. Set aside and stir once a day for several days. It improves with age if let alone. 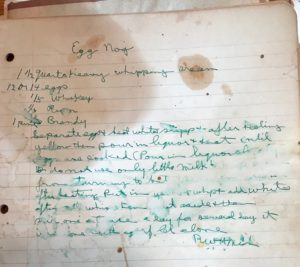