It’s always interesting to cook something you’ve never tried, especially a beloved foodstuff from another country. What are the odds you will be able to get it right the first time? A lot is riding on the recipe you choose. My horse came in when we made proper British Roast Potatoes. 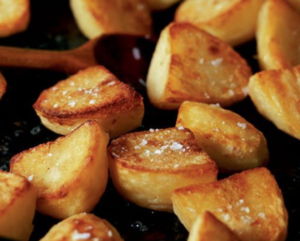 Dan requested Roast Potatoes for Christmas dinner. Internet research led me to the BBC Goodfood site, where a recipe for Ultimate Roast Potatoes from the November 2005 Good Food magazine appears. Though the recipe is written in Brit-speak, it is easily translated for our U.S. audience.

When the delicious potatoes were ready, I wanted to eat them all. They were beautiful and quite tasty, to give a proper British understatement.

The recipe called for Maris Piper potatoes, which aren’t readily available in the United States. I happened to have both russet and Yukon Gold on hand and used some of each.

I wasn’t able to source any duck fat on short notice, and olive oil was a good substitute.

Put a roasting tin in the oven (one big enough to take the potatoes in a single layer–I used a 10 x 15 jelly roll pan) and heat oven to 400°F.

Peel the potatoes and cut each into 8 even-sized pieces if they are large, 4 even-sized pieces if they are medium size, and 2-3 if smaller. Drop the potatoes into a large saucepan and pour in enough water to barely cover them. Add 1 tablespoon salt, then wait for the water to boil. As soon as the water reaches a full rolling boil, lower the heat, put your timer on and simmer the potatoes uncovered, reasonably vigorously, for 2 minutes.

Meanwhile, put your choice of fat into the hot roasting tin and heat it in the oven for a few minutes, so it’s really hot.

Drain the potatoes in a colander. Now it’s time to rough them up a bit–shake the colander back and forth a few times to fluff up the outsides. Sprinkle with the flour, and give another shake or two so they are evenly and thinly coated. Carefully put the potatoes into the hot fat–they will sizzle as they go in–then turn and roll them around so they are coated all over. Spread them in a single layer making sure they have plenty of room.