Adapted from The View from Great Island blog. Mariana Minton and I made peach-jalapeño jam at the beach house in Emerald Isle in 2012 and 2013. We had to make a trip to the Piggly Wiggly in Swansboro to get the canning jars. I like really hot peach jam so I found this recipe. Surprisingly, it is not as hot as you might think. Consider using red habañeros for contrast. This year, our store-bought habañero plant grew huge orange peppers that were the same color as the peaches, so I only used one habañero and tossed in a hot little Thai Dragon pepper for color. 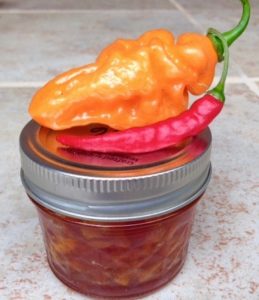 The amount of jam that you get varies, so have eight 4-ounce canning jars ready, though you may need only six of them.  The View from Great Island‘s recipe was for refrigerator jam that doesn’t need to be boiled after jarring.  I added a boiling-water bath so the jars can be stored on the shelf.

Jam-making is just one endeavor that benefits from a kitchen scale.  This recipe might be your excuse to get that kitchen scale you’ve been thinking about.  My OXO kitchen scale, recommended here by David Lebovitz, has become one of the most-used tools in our kitchen.

Put your jars through the hot cycle of the dishwasher to clean.  You can reuse the glass jars, but always buy new lids to make sure that they seal properly. (They sell extra lids right next to the jars in the grocery store.)

Peel and slice your peaches over a bowl, to catch the juices.

Weigh the peaches and then weigh out the same amount of sugar.

Put the peaches, sugar, habañero peppers, lemon juice, and vinegar in a large heavy bottomed pot.  Stir to combine everything and mash the peaches a bit with a large wooden spoon or potato masher.

Let sit for an hour.

Bring the mixture to a boil.  Cook gently for about 30-45 minutes, stirring frequently.  It will foam up for most of the time, and eventually, when the jam is nearly ready, the foam will die down.

When you are satisfied with the jelling, ladle the hot jam into clean jars, filling almost to the top.  Put the lids on, but don’t screw them too tightly.

Boil the jars gently in a hot-water bath for 10 minutes with the water just covering the jar tops.  Remove from the hot water and let cool.  Screw the jar tops on more tightly.  You will hear the tops popping as they cool–the sound of a good seal.

Let the jars cool and store on the shelf.