Life with a pescatarian means a steady search for ways to cook fish. Fortunately some other family members catch fish but don’t eat them, so our freezer is often full of freshly-caught fish. 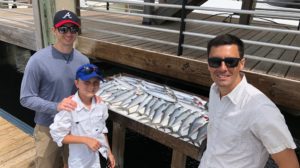 This recipe is adapted from The Lee Bros. Southern Cookbook by Matt Lee and Ted Lee (2006). Everything we’ve tried from that book has been great. Fish Stew Man’s Red Fish Stew lived up to our expectations.

My pescatarian doesn’t eat meat on the wing or hoof, so I had to leave out the bacon. We substituted 2 tablespoons of olive oil for the bacon fat. As good as the stew was without the bacon, I feel sure that using bacon as The Lee Bros. intended would send it into the stratosphere.

The corn is absolutely essential to this stew. Don’t leave it out!

2 serrano, Thai, or other dried red chiles, stems trimmed, slit down their sides, seeded, and flattened

1 1/2 pounds Yukon Gold or other waxy potatoes, peeled and sliced into 1/4-inch-thick half-moons

One 28-ounce can whole peeled tomatoes including juice

1 cup fresh corn kernels, cut from the cob (about 2 ears)

Cook the diced bacon over medium-high heat until the bacon is firm and just golden brown, about 3 minutes. Transfer the bacon to a small bowl with a slotted spoon and pour off all but 2 tablespoons of the bacon fat. Add the chiles and gently toast until they discolor and release some of their fragrance, about 30 seconds per side. Remove with the spoon.

Add the potatoes and sauté in the bacon fat for 5 minutes, stirring occasionally to keep them from sticking. Add the onion and sauté, stirring frequently, about 3 minutes. Add the broth, wine, and bay leaves and bring to a simmer. Continue to simmer vigorously until the liquid is reduced by one quarter, about 6 minutes. Add the tomatoes one by one, lightly crushing each as you add it, followed by the tomato juice. When the stew returns to a simmer, reduce the heat to low, cover, and simmer vigorously for 20 minutes, or until the potatoes are not quite tender.

Add the salt, pepper, mustard, coriander, brown sugar, Worcestershire sauce, and ketchup. Simmer for 10 minutes, covered, until the potatoes are completely tender when pierced with a fork. (Our potatoes needed 25 minutes.)

Add the fish to the pot. Return to a simmer and continue to simmer gently for 5 minutes, stirring occasionally to break the fish into flakes. Add the half-and-half and the corn and simmer very gently for 5 more minutes, until the corn has softened slightly. Season to taste with salt, pepper, and Worcestershire sauce.

Serve over hot white rice or with wedges of corn bread, garnished with the reserved bacon.