From Brother Juniper’s Bread Book (1991) by Peter Reinhart.  These are the best sticky buns in the world. When Rob was a tyke, he called them “Stinky Buns.”

We make these buns a week or two before Thanksgiving and freeze them part-way through the admittedly lengthy preparation. To freeze, cover the pans tightly with aluminum foil after the rolls are placed on pans and put them into the freezer. The night before they appear on the breakfast menu, take them out around midnight (sooner if you are sleepy), loosen the aluminum foil, and leave them on the kitchen counter to thaw overnight.  The next morning they will be ready to bake as soon as the oven is hot.  And you will be pretty popular for making Sticky Buns.

For the Sticky Bun dough

For the Sticky Bun glaze

For the Sticky Bun sprinkle

For the Sticky Bun cinnamon swirl
(do not mix)

Mix the dry ingredients, including the yeast, in the bowl of a stand mixer. Add the ¾ cup oil and the buttermilk. Mix the dough, adding flour until all the ingredients form a ball. Knead the dough for 10 minutes until it is soft and elastic.

If you are used to making wet doughs for sourdough bread, remember that shaping doughs for pinwheels benefits from a less wet dough. Add extra flour to the dough as needed to form a dough that will be easily handled.

Place the dough in a clean covered bowl or dough rising bucket and allow it to rise at room temperature for about 1 hour, until it has doubled in bulk.

While the dough is rising, make the Sticky Bun glaze by creaming together into a slurry the sugars, butter, corn syrup, salt, and flavorings, beating the mixture until it is creamy and fluffy. This step can be done in a mixer or a food processor with the steel blade. Either way makes a mess but the food processor is quicker.

If you plan to freeze the buns prior to baking, place a large piece of aluminum foil on each pan, with enough foil on one side to cover the top of the pan once the rolls are in it.

Sprinkle half (a fourth for 4 pans) the raisins and chopped nuts over the glaze in each pan. The pans are now ready for the sliced dough.

Divide the dough into 2 pieces. Roll each piece of dough into a rectangle about 10 inches wide and 20 inches long.

Place the Sticky Bun cinnamon swirl on the dough rectangle: rub 1 ½ tablespoons (2 teaspoons for 4 pans) of butter on the surface of each rectangle and sprinkle 1 tablespoon of cinnamon all over the surface.

Roll up the dough (the long way–so that you end up with a roll about 20 inches long) and pinch the seam shut. Slice the roll into about 20 pinwheels. Put the pinwheels in the baking pan or pans, spacing them out evenly on top of the glaze, raisins, and nuts. 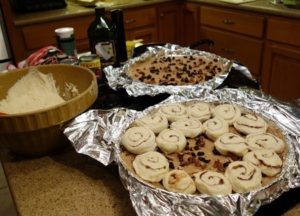 If you plan to freeze the buns, cover each pan tightly with aluminum foil and put them in the freezer. Take out several hours (or overnight) before you bake the buns in the oven. It is very important to loosen the edges of the aluminum foil after you take out the frozen buns so the dough has room to rise. When you are ready to bake the rolls, fold back excess foil from the top.

If you don’t want to freeze the buns and want to cook them now, cover with plastic wrap or a damp towel. Allow about an hour at room temperature for the buns to rise.

When the buns are just about doubled in size (if they stay out all night on the counter they will more than double and that is OK), bake at 350°F for about 25 minutes.  Put a piece of aluminum foil on the oven shelf under the buns to catch the sugar syrup that bubbles over the top of the pan.

If you cook two pans of buns at the same time, switch the pans midway during baking to avoid overcooking the caramel of the bottom pan.

The tops will brown before the glazed bottom so let the buns bake until the tops are a deep golden brown. Remove the pans from oven and let them sit for 5 minutes. Then, using a flat pan or another piece of aluminum foil that is big enough to fit over the top of the bun pan, flip the sticky buns over onto it in one quick motion. The glazed side will now be up and the glaze will run all over the sticky buns and off.  With a metal spatula, scoop excess glaze off the tray and dribble it back over the buns.  Keep doing this until the glaze cools enough that it doesn’t run off. 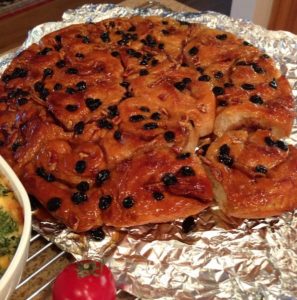 Cool the buns for another 10 minutes before attempting to eat them.  The glaze is very hot and could burn an overeager tongue.