Based on a recipe in an old issue of House Beautiful. A little web surfing shows it came from Vegetable Soups from Deborah Madison’s Kitchen (2006). This soup’s Asian influences satisfy those who love Indian food, but it is gently flavored.

You can leave out the yogurt garnish if you want a vegan dish. 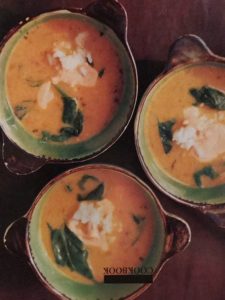 After you’ve soaked the yellow peas, drain and put them in a pot with 2 quarts water, the bay leaves, cloves, and 1 1/2 teaspoons salt. Bring to a boil, then lower the heat to a simmer and cook, partially covered, while you go on to the next step.

Melt the butter in a medium skillet over medium heat, then add the onion and cilantro stems. Cook, stirring frequently, until the onion starts to color and soften, about 10 minutes. Add the spices and 1/2 cup water from the simmering peas, and cook until the water has cooked away. Add the onion to the simmering peas and continue cooking until both are very soft, about an hour in all. Remove the bay leaves and cloves, then purée. Return the soup to the stove.

Finish the soup. Stir in the coconut milk. Add the lime juice, then taste for salt and season with pepper. Stir in the chopped cilantro.

Cook the rice. Bring 1 cup water to a boil, then add 1/4 teaspoon salt and the rice. Give it a stir, lower the heat, and cover the pan. Cook until the rice has absorbed the water and is done, about 15 minutes. Combine the spices with the yogurt and set aside.

In a skillet, wilt the spinach in the water clinging to its leaves, then chop it coarsely.

To serve, ladle the soup into bowls, divide the spinach leaves among them, add cooked rice to each bowl, and serve with a spoonful of the spiced yogurt.