Adapted from My Kitchen Year by Ruth Reichl.  I downloaded the audiobook the first day it was available, September 29, 2015. It was not long before I had to order the actual book so that I could make the delicious recipes, starting with this one. 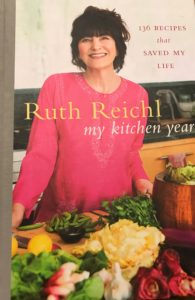 Ruth says: I think of this pretty, spicy, salty bread as an elegant inside-out pizza. It’s a simple yeast dough rolled around a pungently spicy mix of paprika, oregano and anchovies that leaves little pinwheels of color racing through the dough. Nothing tastes better with a glass of robust red wine.

Mix together water, yeast, flours, salt, and olive oil until it comes together in a ball. Knead it for a minute or so on a floured surface. Place into a oiled bowl, cover it, and leave it alone for an hour and a half or so. It should puff itself up to twice its original size.

Roll the dough out into a large round (about 15 inches). Spread most of the seasoned oil almost to the edge of the dough, leaving a small rim. Roll it up into a thin jelly roll and pinch the edges closed. This is a fun and messy process, and if you lose some of the oil, don’t fret. Curl your long, thin roll into a round spiral and set this into an oiled pie plate or baking pan. Brush the top with the remaining oil, sprinkle with a teaspoon of sea salt, cover with plastic wrap and allow to rise another hour.

Preheat your oven to 375ºF and bake for about 35 minutes until you have something that’s crusty and golden. Put it on a rack and allow it to cool completely before cutting into very thin slices, each one a layer of color.  (One warning: this is not a good keeper. Plan on eating it the day it’s baked.)