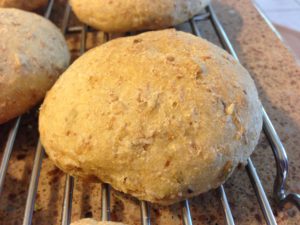 This sturdy dough does best as medium-large rolls that are split, toasted, and buttered for breakfast. When I tried a smaller version of these rolls for a celebratory dinner, the guests got little leaden chunks instead of feather-light rolls.

The first time I made these rolls on the Eastern Shore, there was no Bob’s Red Mill 7-grain hot cereal mix at Quail Cove, our local whole food supplier, so I used half 5-grain and half 10-grain Bob’s Red Mill hot cereal mixes. After trying the 7-grain mix another time, I went back to the combination of 5-grain and 10-grain. It turns out that the 5-grain mix contains 5 of the same grains as in the 10-grain mix, but they are processed differently. I’m still going to call it 15-Grain Breakfast Bread.

I have always found Bob’s Red Mill products entirely satisfactory. Since our recipe for what is known around here as “Seed Bread” was put together, Bob’s Red Mill now offers 6-grain and 8-grain hot cereal mixes. We look forward to trying them soon.

Amounts for Recipe and a half – 36 rolls

Directions for both recipes above

Place cereal mix in bowl of standing mixer and pour boiling water over it; let it stand about 1 hour or until it is lukewarm (about 100°F.)

If you are using the seeds, roast them in a skillet over a medium flame for a few minutes until they start to pop.

Add honey, yeast, and salt to the mixer and stir to combine. Add buttermilk. Add flours until dough cleans the sides of the mixer. Turn off mixer and let dough rest for 20 minutes.

Knead on medium-low speed for 7-8 minutes. Add seeds if you are using them and mis until seeds are evenly dispersed, 1-2 minutes. Place dough in large bowl, cover, and allow to rise until doubled, about 90 minutes. You can also put the bowl and dough in the refrigerator to rise overnight. Remove it at least 2 hours before you shape the rolls to allow the dough to return to room temperature.

Shape into 24 rolls (or 36 rolls if you are using the Recipes and a Half) and place on 2 or 3 baking sheets. Cover and allow to rise until doubled, 45 minutes.

Roast the seeds in a skillet over a medium flame for a few minutes until they start to pop. (If you have no flame or skillet, you can use the broiler of a toaster-oven for 2-3 minutes). Put all the other ingredients in bread machine and mix until dough cleans the sides of container. Turn off machine and allow dough to rest for 20 minutes.

Add seeds if you are using them. Knead for 7-8 minutes. Remove dough from machine and place into bowl. Cover and allow to rise until doubled, about 90 minutes.

Shape into 12 rolls (the rolls will be slightly larger than those in the regular recipe) and place on a baking sheet. Cover and allow to rise until doubled, 45 minutes.